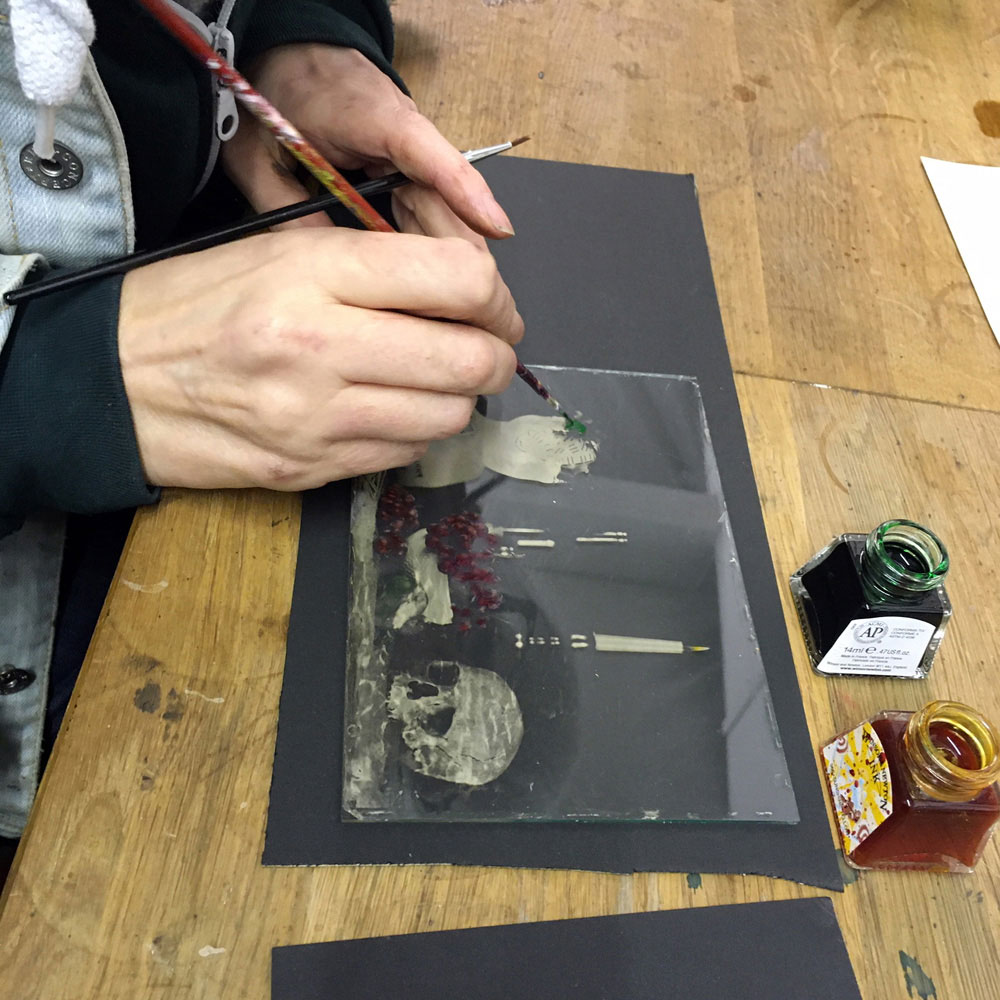 We’ve recently been conducting some experiments into the art of hand-tinting wet collodion plates at Rabbit Hole Studios. These began by setting up a still life, pictured below, of which we took a number of ambrotypes. A second still life involved obliging sea bream, hessian and some ivy. We made ambrotypes of this also, as well as some tintypes and a collodion lift.

We began with a known quantity: chalk pastel dust applied to an ambrotype using the Victorian “breathe and paint” technique. Firstly, a scalpel blade is used to scrape small amounts of chalk pastel powder into an assortment of different colours (in the photo gallery above, this is the bottom, right hand corner photo). Next, the colourist breathes condensation onto the lighter portions of the image (see gallery below) before layering chalk pastel pigment using a similar technique to that of watercolour painting. In the case of liquid pigments, including Windsor & Newton and the Fotodyes, the inks were greatly diluted (a roughly 1:10 pigment to water ratio) before being applied to the plate using a similar technique of layering.

Moving through the different inks, we tried each on glass and tin until all plates were coloured. The plates were then finished with a hairdryer and Renaissance Wax. Of the techniques attempted, only the more traditional method – chalk pastels – suffered significant fading during varnishing, as you can see below in the left hand image. Another experiment that produced mixed results was one on which we used a combination of Faber Castell Watercolour Pencils and Pebeo Fantasy Moon Deco Paints, pictured right (it was somewhat garish!).

The various results can be seen below, with a surprising win for the previously untested Fotospeed Fotodyes, which Martina used to colour a tintype, yielding lovely results. Kate’s favourite variation, meanwhile, involved Windsor & Newton Drawing Inks applied to a collodion lift on a metal substrate.

Martina’s discovery of the efficacy of Fotospeed Fotodyes on collodion will definitely lead to further hand-tinting work using that method.