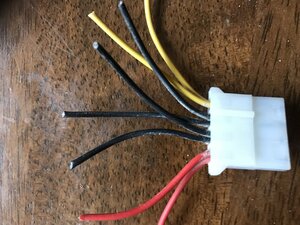 Having acquired a new lens earlier this year, John found that he couldn’t use flash, as the lens didn’t have a PC socket. Instead, it had a bi-pole flash connector. Asking for help on Facebook, several people came up with suggestions. Charles Twist, a large format photographer, had the same problem some time ago and suggested that John harvest a Molex connector from a computer. The sockets on the Molex connector fit tightly on the bi-pole pins, so it was just a matter of soldering the connector to an old PC cord and covering with some electrical shrink wrap.