A Haunting at Beckley Park

We had a great time doing a little spirit photography for a short ghost film being made at Beckley Park, Oxfordshire. As soon as we arrived at Beckley (“first enclosed”, Wikipedia tells us, “in the 12th century from land held by Roger D’Ivry built in 1540 by Lord Williams of Thame”), we were impressed by its beautiful grounds and otherworldly atmosphere. We were met by the director of the film, Cosmo Fielding Mellen, whose home it also is. Cosmo showed us to a bucolic, rose-entwined cottage where we had a lovely stay.

In the morning, Cosmo showed us around the grounds, including one side of the house surrounded by a maze of Lewis Carroll-esque topiary, in which a scene from Harry Potter and the Goblet of Fire was shot. As producer Katie Dolan made her way from London, John and I set up the camera and fishing tent.

Once Katie arrived, John took the first ambrotype, an image of the house. Successive plates showed an upstairs window opening onto darkness, a pale figure just visible standing at the window and a caped ghost crossing the lawn. Despite a few technical problems involving too-bright sunlight, it was a fun and productive day with much spirit photography high-jinx.

The film promises to be an eerie, dark tale of grief and obsession and we can’t wait to see it. By all accounts the ambrotypes themselves will play a big role in the film (also starring Anna Chancellor), hence the title, DARK GLASS… 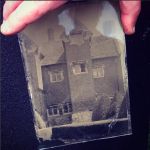 Ghostly ambrotype of the open window. 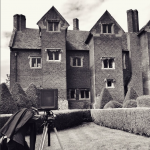 John setting up a shot of Beckley Park. 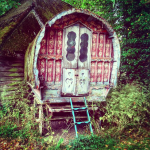 There was character to spare at Beckley Park. 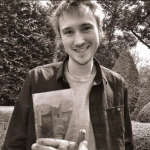 Director, Cosmo with the first ambrotype of the day. 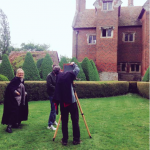 Producer Katie prepares to model as the mysterious ghost haunting the gardens.

← Photoshoot for ‘The Ninetree Stumblers’
→ ‘Out of the Ether’ course, Stills Gallery Edinburgh